DVD: He Got Game 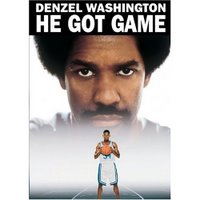 Lowdown: Basketball is life, and life is all about the money.
Review:
Inside Man has helped me remember how much I like Spike Lee; I just had to watch He Got Game once again.
He Got Game is Lee's ultimate statement on basketball, his favorite sport. In much the same way as I treat football, Lee treats basketball as a religious experience (just watch the film's opening scenes, showing real people playing the game in very different setups); yet just like me Lee is disillusioned with the game because it has stopped being a game long ago and is now governed by money.
In typical Lee fashion, this is yet another New York story, too. Denzel Washington plays a prisoner, in jail for killing his wife. His son, played by the real NBA star Roy Allen, is about to graduate high school as the USA's most promising basketball prospect, and he is courted by pretty much everybody. Denzel is promised an early ticket out of jail if he gets Allen to sign up to the state governor's favorite college.
Washington is set loose in New York in order to convince Allen to make the right choice, but he is facing tough odds. Allen doesn't like his mother's killer, for a start; and Washington is quite late in joining the fight for convincing Allen: everyone else, from Allen's high school coach through the rest of his family and girlfriend tries to convince him to go their way - and everyone has some very selfish reasons for doing so.
Money is waved in Allen's face all the time, but he is convinced that education and personality are more important and that the choice of college should be made for the "right" reasons and not for the financial reasons. With all the temptations put in his way, which choice will he make?
Through basketball, Lee is making some severe statements in this film about capitalism, corruption, and how our world is being run. He is not an optimist, but he does suggest sticking up to what is right while playing along to the corrupt machine that runs the world (and as with Inside Man, the higher up the food chain one gets, the worse things become).
However, Lee is also telling the story of a family torn apart by a Greek tragedy like event. The story is touching and drives the film along to its highly potent climax. The climax is handled superbly, but the way there strays off the path slightly yet enough to detract from this highly potent film.
Best scene: The scenes in which people are trying to convince Allen are the most entertaining ones in the film. There's a scene where a couple of "gifted" female college students try their unique ways to convince Allen, but the best one is the scene where a rich sports agent tries to convince him to join the NBA by showing off with his sports car collection and indoor basketball court. What is the American dream if a guy needs to have several Ferraris, Mercedeses and Lamborghinis in his garage and a Rolex on his wrist in order to feel good about himself?
Picture quality: The DVD mastering is obviously "old"; there are plenty of artifacts about, of types you don't see in newer DVDs. The picture is usually of high contrast, but it is obviously the director's choice.
Sound quality: Ok, but far from mesmerizing. The classical soundtrack by Aaron Copland is superbly recorded and fits the film's climaxes like a glove.
Overall: 4 stars.
Posted by Moshe Reuveni at 10/08/2006 12:10:00 am
Email ThisBlogThis!Share to TwitterShare to FacebookShare to Pinterest
Labels: Film