DVD: Harry Potter and the Goblet of Fire 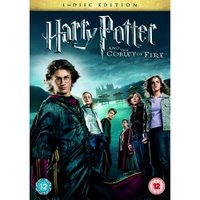 Lowdown: Harry Potter in three contests and a funeral.
Review:
Well, here's one film where I don't really have much to say. We saw it not that long ago in the cinemas, and because we fell prey to the marketing ploys we rented the DVD to watch it again; we definitely didn't do that because the film is so exceptional we just had to watch it one more time.
The [currently] last film of the Harry Potter franchise is similar to its predecessors in the dominant factors of (a) a plot that doesn't really make sense and (b) very poor acting on behalf of the younger players. I guess it's the problem you have to face when converting a book dominated by atmosphere into a film driven by the plot.
In this one Harry and the gang have to go through a tournament of very weird and dangerous challenges. The challenges related action scenes are pretty exciting as long as you don't ask why the whole affair is taking place; and in between, Harry goes through his initial phases of puberty.
Puberty is quite the key here, because it is obvious that the film is aimed at the young teenager (and not at someone like me). Yet I cannot hide my disappointment of the fact the film makers chose to make a film that most teenagers will probably enjoy, yet no one is going to come out a better person for it. It's pretty shallow, to put it bluntly.
As with the other films of the series, the film is made to look and feel very British. Which is nice since it helps the film stand out amongst the majority of American films; however, I think this one overdoes it a bit after the 729th time the actors utter expressions such as "brilliant" or "wicked" and drive you mental.
The bottom line is that the action scenes are pretty exciting but the rest of the film is just good enough to pass a few hours with but not much more than that. While it is immensely better than the first two Potter films, I think Azkaban was so far the best of the Potter films.
Best scene: Harry meets Voldemort face to face. It's exciting, and it was nice to see how much of a difference the presence of Ralph Fiennes makes.
Picture quality: Overall quite good, but there are just too many and too noticeable digital artifacts.
Sound quality: Ok, but for a film that's supposed to be a roller coaster it is way below what it should be.
Overall: 3 stars after receiving a bonus for being an ok film for its particular genre and specific target audience.
Posted by Moshe Reuveni at 10/04/2006 10:47:00 pm
Email ThisBlogThis!Share to TwitterShare to FacebookShare to Pinterest
Labels: Film