Movie: Thank You for Smoking 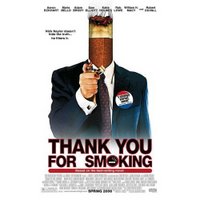 Lowdown: An intimate look at the inner workings of the spin machine.
Review:
Thank You for Smoking is one of those rare occasions where an American film manages to be original and smart. When they manage to achieve that, American films tend to be really good, and indeed this one is quite a good film.
The story follows the guy who serves as the tobacco companies' spokesman. While going through various events taking place in his life, the film explores the morality behind the way the big companies treat the public on their way to rub it out of its cash. While focusing mainly on the tobacco industry, the film makes sure you know the same rules apply to other industries: alcohol, fire arms, oil, food, pharmaceutical, communications - you name it; it's just that cigarettes are probably the easiest to pick on because they do not provide any benefit whatsoever.
It's one of those films that may help the more naive viewer realize how much they're being manipulated by the big companies. Al Gore's book, An Inconvenient Truth, mentions that one of the reasons why global warming is not on the top of the agenda is the "noise" generated by companies who do not want it to be at the top of the agenda, causing half of the articles discussing the phenomenon to express doubt about its authenticity. Well, the film definitely shows how this twisting of the facts takes place. The problem, however, is that I doubt that the people who need to see the light will get to see a film like this; they are more likely to avoid a smart film and settle for the normal trash Hollywood tries to feed them.
Other than that, the film's main shortcoming is that despite its short duration (circa 90 minutes), it fails to excite. It's interesting, it's smart, but it won't keep you at the edge of your seat.
Best scene: The film's hero tries to convince the guy who played the Marlboro Man not to sue the tobacco companies now that he is sick with cancer by offering him a suitcase full of money. The scene shows how incapable we are compared to the big companies to change the world by showing the weakness of the individual trying to change the world.
Overall: 3.5 stars which could have easily been 4 or more with a slightly more exciting adaptation.
Posted by Moshe Reuveni at 9/02/2006 11:20:00 pm
Email ThisBlogThis!Share to TwitterShare to FacebookShare to Pinterest
Labels: Film