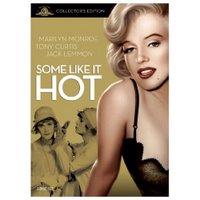 Lowdown: Your typical "men dress up as women and generate laughs" comedy, only that this was the first.
Review:
I like to think of myself as a fan of Billy Wilder, but I don't think I cut the mustard. I bought Cameron Crowe's "Conversations with Wilder" book a good few years ago but didn't even manage to read the back cover since. And despite thinking that The Apartment is a masterpiece, I never got to see Wilder's most familiar film - Some Like It Hot.
So how does this classic tale of two fugitive musicians, Jack Lemmon and Tony Curtis, fleeing from the clutches of the Chicago Mafia by pretending to be women fare? Well, it's quite good, actually, but not Wilder's ultimate piece. I suspect that it is remembered the way it is today more because of the participation of one Marilyn Monroe in the case, rather than because it is a genuinely good film; and it is probably also remembered because it was probably the first time men posed as women on the big screen.
The film is full of silly situations that make you laugh in a good hearted way, but by today's standards it stretches the imagination all too freely. Still, it is innocent fun, and you do get a chance to watch a master actor at work: Jack Lemmon's performance is genuinely special, compensating for Monroe who seems to have found herself in the cast because of her big tits rather than her acting ability.
There is a lot to be said about the Wilder style: the simple way of him doing things, the funny way in which he drives the plot forwards, and the ending which is not your typical "sail into the sunset" ending you'd expect from an American film today (even if it's not too far).
To sum it up in one word: A classic.
Best scene: Jack Lemmon dancing with the rich idiot courting him. If you won't laugh at that, you're dead.
Overall: 3.5 stars. Most contemporary comedies could do with a lesson or two from Wilder.
Posted by Moshe Reuveni at 9/18/2006 01:24:00 pm
Email ThisBlogThis!Share to TwitterShare to FacebookShare to Pinterest
Labels: Film