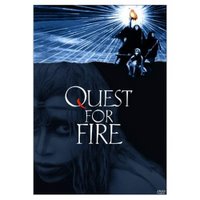 Lowdown: Life was pretty hard 80,000 years ago.
Review:
The first time I've seen this rather unique film from 1981, I was 10 years old. It left a lasting impression on me: I could not forget its portrayal of the world of early man. And then there was also the issue of quite a graphic sex scene that at the time I could not understand (and for some odd reason, no one bothered to explain it to me); it took me a few years to realize what really took place there.
Nostalgia aside, what is the film about? Quest for Fire tells the story of a tribe of humans (which seemed Neanderthal to me) some 80,000 years ago, at the time in which man has just discovered fire and found out how useful it could be. The tribe loses a fight with another tribe of humanoids (very furry ones), and as a result their carefully guarded fire gets extinguished. A group of three men is sent to acquire a new fire for the tribe, and the film follows their quest.
The plot, however interesting and unique, is just a tool for the director to take us for a tour of the cavemen's world. And what a world it is! For a start, it's a very dangerous world; a world where a person's safety can never be taken for granted. Between wolves and saber tooths, mammoths and bears, man is no longer just the hunter - man is also being hunted. And if that is managed, there's the risk of cannibals. Things that we take for granted to take place in a certain way could not have been taken for granted back then: a nice place to spend the night in, heat, privacy, something to eat, respect for one another, sex as something more elaborate than pure animal instinct. And language, if we seek further examples.
I cannot say much about the film's authenticity; I have no idea what took place 80,000 years ago, but I don't think it matters. I don't think Mr Annaud (the director) set out to give us a history lesson; I rather think he wanted to tell us something about ourselves: the fragility of our environment and how easily it could break down, leaving us back at the Stone Age, literally. One has to take into context the fact the film was made during the peak of the cold war, but the lesson still applies for today. If anything, it shows how valuable civilization is and how valuable knowledge and information are to have gotten people who were physically identical to us from zero to where mankind is today.
I found the message to be so well delivered that the film becomes quite scary. It is much scarier than most proper horror films, just because it is so real. If you compare it to another apocalyptic film, say- Planet of the Apes, you cannot escape the fact that the idea behind Planet of the Apes is very fictitious while Quest for Fire portrays something that really took place, even if circumstances were slightly different.
Two things hinder the film. First, the behavior of the film's cavemen - the way they converse, the way they procreate - can easily stir the viewer towards laughter in ways the director didn't really plan for (the film is not short of proper comic relief). And second, the film's sound is obviously dubbed and obviously not that well dubbed, causing frequent distractions.
However, other than those issues, the film is a classic.
Best scene: Once their fire has been extinguished, the humans flee from a pack of wolves they formerly scattered with the help of fire. It's an early scene that really delivers the anxiety and the hopelessness of the time.
Overall: 4.5 stars.
Posted by Moshe Reuveni at 9/18/2006 01:20:00 pm
Email ThisBlogThis!Share to TwitterShare to FacebookShare to Pinterest
Labels: Film