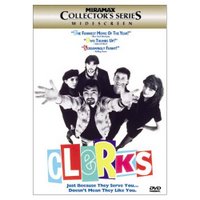 Lowdown: Life is like a day spent running a grocery store.
Review:
Several years ago I watched Clerks for the first time after it was recommended by a friend. I didn't expect much at all, so I was quite surprised by how good it was. With Clerks 2 now airing, I thought I'd revive old memories and watch the original again. This time I did expect much, and this time I was quite disappointed.
Clerk's premises are pretty simple: it tells the story of a day in the life of two young clerks running a grocery store and an adjacent video rental shop. The film threads along the handling weird customers, having deep discussions about rather mundane issues, dealing with the frustrating circumstances of their work, and dealing with their girlfriends.
All that transpires is served as a mirror to the circumstances of the modern day Western adolescent. It is also made to make us laugh, and although laughs are relatively far apart it managed to make me laugh hard on several occasions.
However, this time around I couldn't help noticing that at its bottom line, despite all of its witty insight, the film is pretty shallow. Yes, with the way we're going our lives tend to be as deep as a grocery store, but that doesn't mean I have to spend some of my precious time learning something I already know. I guess I have outgrown the film, age wise.
Best scene: The two clerks discuss the morality of the Star Wars' rebels killing all the innocent construction workers working on the second Death Star in the film Return of the Jedi. Alas, a scene that was once original is no longer so when everybody from Family Guy to the British series Spaced uses Star Wars jokes as a main running theme.
Overall: 2.5 stars.
Posted by Moshe Reuveni at 9/03/2006 12:08:00 am
Email ThisBlogThis!Share to TwitterShare to FacebookShare to Pinterest
Labels: Film