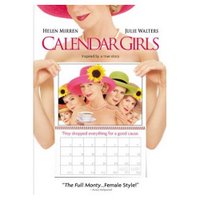 Lowdown: The Full Monty worked well, so let's make more money by doing the female version.
Review:
For better or for worse, Calendar Girls is a very British film. Set in Yorkshire, the British-ness of it gives it a certain aroma of innocence that is lacking from American "let's make lots of money" attitude films. On the other hand, the film's symbol of success betrays its British origins: the successful heroines go to Hollywood.
But I'm ahead of myself here. The film's premises is very simple, too simple: a bunch of older (but not too old) women want to raise money for a new sofa to the hospital ward where one of their husbands lived his last days not too long ago with cancer. As they obviously saw The Full Monty, they decide to do a nude calendar, and from then on the film follows their struggle to produce the calendar and then cope with its success and then go back to their real lives.
It's all done with a very innocent spirit, but that innocent spirit is the culprit of the film - it's just too much to accept, and everything becomes way too predictable. A third of the way through you just wish it would end soon because there won't be any more surprises to keep the film alive; the concept of a nude calendar is just not enough to keep a film alive through and through.
Best scene: Following the success of the calendar, the heroines approach a Virgin Atlantic counter to check in to their trans Atlantic flight to Hollywood. They are told they don't belong there, and after a "big shock" they learn this is because they have been upgraded, and then they learn they can actually check in where they are. This scene is actually far from being the best scene in the film: it is, however, a good representative of its contrived and artificial spirit. And it also shows product placement at its worst.
Overall: 1.5 stars; watch the Full Monty again, instead.
Posted by Moshe Reuveni at 9/13/2006 10:41:00 am
Email ThisBlogThis!Share to TwitterShare to FacebookShare to Pinterest
Labels: Film

It's good to see you're making good use of your recovery time.
BTW, what is the difference between 'movie', 'film' and 'dvd'?
I thought 'movie' meant the cinema, but now I'm all confused.