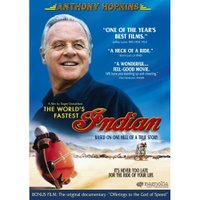 Lowdown: Uncle Anthony's old age dream fulfillment as the ultimate in catharsis.
Review:
Amongst film genres there is that small niche of films that are meant to make you feel good. Frank Darabont, the maker of (amongst others) The Shawshank Redemption, seems to have made a career out of making such films. However, in this day and age of overdoing things, good make-you-feel-good films are rather rare; you may have thought they were extinct, but then Fastest Indian came along to prove that the last good word has not been said yet.
The story is as simple as stories go: Anthony Hopkins is an old guy with only one thing in his life - his ambition to break the world's speed record using his old Indian bike. Alas, his native New Zealand cannot provide him with the means of doing so, and thus the film becomes a journey film depicting his trek to Utah's salt lakes and [excuse me for telling you the totally unexpected ending] how he succeeds in his task. The film's formula for moving the plot along is simple and predictable: the hero encounters a problem on his way, and using the help and the good will of the people around him at that certain moment he addresses the problem and quickly moves on to face the next challenge.
As a "make you feel good" film, Indian is special in two ways. The first is that aside of Anthony Hopkins, there are no other main characters competing for screen time - characters come and go, but they're not there for long.
The second, and more unique feature, is that there are no baddies in this film. Yes, there are a couple of brief bad encounters upon arriving to the USA, but they're just passing glimpses. Everyone else in the film, even those alien to the hero's cause, quickly becomes supportive and "good" to the cause. Which is a bit of a problem for me: the world's conservatives, with whom I have a lot to argue about, often aspire to some mythical past that never really existed other than in their imagination; this film will definitely add a lot of fuel to their passions with its portrayal of a past in which everyone helped anyone and the world was just a shiny bed of roses.
My problems with the film do not end there. A major issue I have is with the Hopkins character repeatedly stating the mantra that it's the risks that you take in life that make it worth living (case in point: his dangerous bike rides). While we all take risks with everything that we do (or even when we do nothing), I do not think that it is the risks that make my life worthwhile; on the contrary, I think that those who must take risks to feel alive probably suffer certain psychological deficiencies that mean they feel they have to prove something to the world around them by taking risks. If there was no one else in the world besides them to observe their achievement, would there have been any value to the risks they take?
My last gripe is with the film presenting the hero's success at his ultimate goal as the thing that would make or break him. I simply cannot accept that and for a simple reason: for every person that sets out to achieve a certain noble goal and manages to achieve it, there are many others that fail.
Take the AFL or the English Premiership: there are 16 to 20 teams fighting out for a title, but only one of them manages to clinch it at the end of the season (and with the Premiership's case, the title holder comes from a very narrow group of privileged teams). Does that mean that all the other teams do not have a place in the record books? Does it mean that their achievements are meaningless and that only the ultimate winner is remembered? Well, if that is the case, it would greatly diminish the value of the winner's title.
However, with all the criticism I have at the film, it certainly does one thing well: it makes you feel good. Its simple formula proves that simplicity prevails, and there is just no way for you to resist the charm of the main character and identify with his fight to fulfill his dream.
Best scene: It's hard to pinpoint at a specific scene. In the end, I probably liked the scene where the rival motorcycle gang, who at first mocked Anthony Hopkins for his old bike, ended up supporting him with money for his trip to the USA. It was the film's first genuine case of people changing their mindset to support the hero, and it was a case of excellent acting on Hopkins' behalf when he switched from suspicious to grateful.
Picture quality: Some of the film's early scenes were shot with high contrast film, making them look very noisy. Other than that, the DVD sports one of the best pictures I've seen from the DVD format, with excellent color rendition making the picture look as real as high definition.
Sound quality: Other than the scenes were the speed contests are held, the usage of sound to promote the film's agenda is pretty limited, both in the effects department and in the score department. Pity.
Overall: A cheerful 4 star effort.
Posted by Moshe Reuveni at 9/09/2006 05:30:00 pm
Email ThisBlogThis!Share to TwitterShare to FacebookShare to Pinterest
Labels: Film