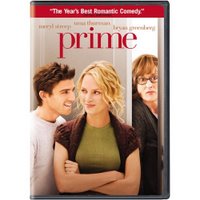 Lowdown: A love triangle between the girl, the boy, and his mother.
Review:
Romantic comedies are a genre that has been choked to death with supposedly new and innovative ideas that fail to deliver. In Prime's case, the idea seems to have potential on paper: Instead of having the usual love triangle of a guy and two girls, let's switch one of the girls with the guy's mother.
And thus Meryl enters the scene as the psychologist working (for a rather unexplained reason) with Uma Thurman, who, by total coincidence, happens to fall in love with Streep's much younger son. The comedy element of the film is based on the Jewish mother's reluctance to have a non-Jew in the family (Streep is Jewish, Thurman is positioned as too good looking to be one) plus Streep's problem with her son falling for someone 14 years older than him.
Does this setup work? Is it a comedy worth watching? Well, we thought that with Meryl Streep around, things cannot go wrong; she was, after all, excellent in Adaptation. And Prime did get good reviews when it was out.
Alas, it doesn't work at all. The one gag running throughout the film - the conflict between the Jewish mother and the not so Jewish good looking girlfriend - is enough for about 10 minutes, after which the film becomes just another dull affair. The only positive thing I can say about it is that some of the compositions are interesting, but other than that this is a truly unoriginal and uninspiring film that is best avoided. The ending is good, though, if you manage to last till then.
Best scene: Thurman visits the Streep's house for Friday night dinner and brings a good bottle of wine, which the family stashes in the freezer so it would taste better. The scene is a good representative of the type of jokes you can expect to find in the film, and pinpoints the fact it is a rather thin and dull line that the film is walking.
Picture quality: Quite good, but... lots of digital artifacts such as edge enhancements give away the fact that not enough attention was paid to the digital mastering process.
Sound quality: The sound mixer forgot to use the surrounds (with the exception of one club scene). Don't ask me why.
Overall: A dull 1.5 stars effort.
Posted by Moshe Reuveni at 9/13/2006 10:04:00 am
Email ThisBlogThis!Share to TwitterShare to FacebookShare to Pinterest
Labels: Film