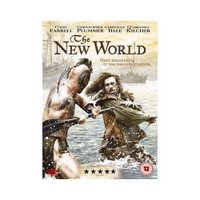 Tag: Close encounters of the first kind
Lowdown: The story of the first encounter between English settlers and native Indians in Virginia, better known for the story of Captain Smith and Pocahontas.
Review:
Terrence Malick is one of those directors that get excellent reviews when they fart. He only made two proper films before the subject of this review - Days of Heaven featuring a young Richard Gere from back in 1978, and star studded Thin Red Line from 1998. Despite the excellent reviews those films have received, I found them both to be way too slow and quite boring; an exercise in trying to find a stunning shot, but not the best of samples as far as cinematic story telling is concerned. I can see why the bleeding hearts like the guy, but he just doesn't strike a chord with me; or did he? I had to try his new film, The New World, to see if there is any reason for me to change my Malick verdict.
So what is New World about? It tells the story of the first English settlers arriving in Virginia during the early years of the 17th century and their encounters with the local Indians. Taking center stage are Pocahontas, an Indian princess, and Captain John Smith (played by a rather annoying Collin Farrell); she saves his life when he's captured by the Indians, and eventually finds herself becoming one of the English in name and domination.
However, the real story Mallick is trying to tell us is the story of the encounter between the English and the Indians. One is not left to doubt even for a second which side Mallick is barracking for: The Indians are portrayed as the ideal incarnation of nature and men, lacking in anything to do with selfishness and deceit (a trait we learn about through the narrator, because otherwise all Mallick tells you about the Indians is that they move in slow motion under very photogenic conditions); the English, on the other hand, are dirty, corrupt, and are driven only by selfish motivation to accumulate more wealth. They're even quite ugly, other than Captain Smith of course.
But even Smith is not immune to the disease of selfish status accumulation. He leaves his love, Pocahontas, behind him in order to seek fame and fortune by finding a passage through the Americas and into the Far East; Pocahontas is then snatched by another settler, Christian Bale, who takes her back to England. All the while Indian lands are cleared in order to make more space for tobacco plantation, creating more wealth for the new settlers.
Given the regular doses of Indians and cowboys films I used to watch as a child, where the sophisticated cowboys show a thing or two to the primitive Indians as they butcher them, this film is quite unique in its portrayal of events from the opposite point of view. It is the new settlers that are corrupting the natives here, and while they do it Mallick tells us a thing or two about the corrupt nature of the human heart that dominates our world today - the heart that wishes to acquire more and more with total disregard to others and total disregard to the consequences.
That said, as much as I sympathize with Mallick's statement, I cannot endorse the film. Once again I found myself annoyed with the too abstract nature of Mallick's direction, the slow pace, and the emphasis on getting that really good shot. If you like films for the way they look there is no doubt you will find this one astonishing; but as for me, I have a problem with the unfocused narration that drives Mallick's films forward. I know I've been spoiled by the likes of Spielberg in this department, but as much as I would like to credit Mallick I just can't.
Best scene: The first encounter between the English and the Indians is very interesting, with the contrasts between the two taking the lead.
Picture quality: Quite good, with the occasional digital artifact.
Sound quality: The sound effects are ok but nothing spectacular. The score, however, is very well recorded and exquisitely mixed; when it's on, it takes center stage and just drives the film sublimely. That said, James Horner's score is rather lacking in originality and sounds too much like his older creations.
Overall: 2.5 stars; I am not a Mallick fan yet.
Posted by Moshe Reuveni at 9/30/2006 06:04:00 pm
Email ThisBlogThis!Share to TwitterShare to FacebookShare to Pinterest
Labels: Film