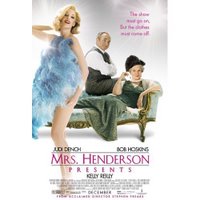 Lowdown: The story of England's first strip show presented rather innocently.
Review:
This is the second film featuring Judi Dench I get to review in this forum. Like its predecessor, it is another naive looking English film about the loss of innocence, only that in this one it is much harder to accept given the film's subject.
"Inspired by true events", Dench plays Mrs Henderson, a recent elderly widow, whose now deceased husband left her very rich following his escapades in India. Dench has obviously never faced real life on her own, and in order to pass the time she decides to buy a theater.
She hires Bob Hoskins to manage the theater, and the two get along just like Tom & Jerry, which sorts of builds an aroma of suspense around the characters.
The two start a new trend in London: all day long theater shows. At first they are successful, but once the other theaters copy them Dench starts losing a lot of money. And so, to compensate, she comes up with a new idea: have the actors take their cloths off during their shows.
"Oddly enough", the idea proves successful, probably because no other place on the island had anything to compete with such a show. And then World War II breaks, and the Dench/Hoskins duo have to battle the odds in order to keep the show going.
Overall, this is quite a successful film if all it is set out to do is cheer its audience and give it a taste of good old English values, for better and for worse (mainly for the better). However, when you think about it, the film suffers from some significant credibility issues: the film portrays the strip shows as nice family fun, whereas we all know that this type of entertainment, legitimate as it may be nowadays, tends to attract the rather dubious elements of society. London during the Forties might have been an innocent place, but hey - nowhere on earth was that innocent.
This is forgiven given the film's rather humorous approach to things. By today's standards, the strip shows featured in the film are as erotic or as gross as the Six O'Clock News; the musical bits are quite entertaining, and all of it just puts an innocent smile on your face and leaves you yearning for days gone by that were never really there.
Best scene: Dench argues in favor of the strip show with the Lord in charge of England's entertainment. The distinguished Lord is worried about the public display of the "Midlands" (the area commonly referred to in Australia as "the map of Tasmania"), and Dench finds very funny ways to relieve him from his worries.
Picture quality: There's a significant red hue to most of the scenes on this DVD; I have no idea whether that is intentional or not (I cannot see why), but it's distracting. Other than that the picture is quite mediocre, with not much in the way of detail.
Sound quality: Surprisingly enough for a film obviously made to a relatively low budget (compared to its Hollywood counterparts), the sound mix is quite good. The musical numbers offer a very effective soundtrack to accompany the screen action.
Overall: A nice 3 stars.
Posted by Moshe Reuveni at 9/20/2006 02:41:00 pm
Email ThisBlogThis!Share to TwitterShare to FacebookShare to Pinterest
Labels: Film