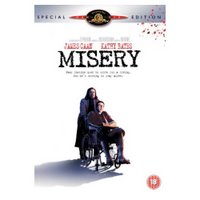 Lowdown: Writer's block will never be the same for this writer, held hostage by a lunatic fan.
Review:
For a film of Misery's quality, it's rather surprising for me to declare that until last night I only saw it when I rented the Laserdisc more than 10 years ago. However, recent discussion on the quality of director Rob Reiner's plus personal circumstances sent me delve back into this fascinating piece of work.
It's interesting to note that while I don't like reading Stephen King's books, some of the films based upon his work are truly exceptional. The Shawshank Redemption is the one I like the most, but Misery is not exactly lacking either.
The story is wonderful in its simplicity. James Caan is playing an actor writing in snowy Colorado, who upon finishing his book finds the snowy conditions too hard for driving back home to New York and ends up in a car crash, only to be rescued by his biggest fan - Kathy Bates. Bates gets Caan back to her place and takes care of him, but quickly enough you learn that Caan is actually in jail and slowly you learn just how mad Bates' character is and about her expectations from the miserable writer who is now at her mercy while the outside world seems totally clueless as to what is going on.
For what is a horror film, the film is very cleverly designed. The plot is a metaphor for a writer, or any type of creator for that matter, who is experiencing writer's block and whose work is being twisted by the outside world; the film takes this motif and expands on it with every scene by creating a love/hate relationship between the writer and his tormenter (peaking at the ultimate fight scene between the two, which is shot the way a love making scene would be).
Everything just works so incredibly well in the film. The pacing is perfect. The editing - especially in some specific "action" scenes, like Caan's attempts to escape from his room - masterful. The musical score is incredibly well matched to the onscreen action, rendering Misery as one of the films that cannot be imagined to take place without it. And the cinematography finds ingenious ways to make a setting which is on the very simple side of things and portray them as anything from menacing to romantic.
Perhaps the film is so good because it is a horror film made by people who have nothing to do with the genre; regardless, it is an excellent piece of work.
Best scene: Bates breaking Caan's legs to prevent future escape attempts. The camera angles, the cheery expression on Bates' face as she nonchalantly explains what is about to come - that's true horror for you, long before Bates lifts her mighty hammer.
Picture quality: In general the picture is quite good, but it definitely shows the aging of the source material (although 1990 is not that far back).
Sound quality: Almost everything is locked to the center channel, other than the score which is spread all over. However, that spreading of the score is rather on the artificial side of things; instead of being immersed within the orchestra's hall, you hear the music playing in front of you in one moment and behind you the next. As with the picture, the sound shows its too advanced age.
Overall: It's a pleasure to watch Misery. 5 stars.
Posted by Moshe Reuveni at 9/22/2006 02:56:00 pm
Email ThisBlogThis!Share to TwitterShare to FacebookShare to Pinterest
Labels: Film