DVD: In Her Shoes 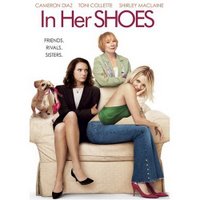 Lowdown: Family is one of the most important things in life, but it also drive you crazy.
Review:
Here is a film that turned out to be totally different to what I expected it to be. I expected a cheap and light American comedy telling us the story of two sisters, one good looking the other not so, and how they manage to cope with their attributes.
Instead I got quite a complicate portrayal of family affairs that is totally not your typical run-of-the-mill American film effort. While the general plot line was indeed along the lines of what I expected it to be, the depth of discussion totally overwhelmed my non existent expectations. In fact, I didn't know they still make films that are so character driven and with such well developed characters anymore.
With that exposition out of the way, here is the executive summary of the plot. Toni Collette is a successful lawyer; her good looking sister Cameron Diaz thinks she has lots of talent, but in fact she abuses her looks to try for the easier deals and ends up with nothing much on her hands but lots of damage to the family members who end up having to support her. The conflict between the two is the plot driver of the film, which starts with Diaz totally annihilating everything Collette worked to get (at the office and in the bedroom). Diaz runs off to look for her missing grandmother for someone new to rely on, while Collette rebuilds her life and finds that Diaz may have indeed done her a favor.
I could go on, but that would ruin the film. The plot develops in surprisingly convoluted ways, raising all sorts of questions along the way - what is success, what is it that we're working our guts for, and much more. The film ambitiously and successfully tries to answer these questions by stating that our families stand behind all of these - that it is the family that makes it all worthwhile, but also the family's expectations that drive us nuts. Whether it's through inadequate communication or through unrealistic parental expectations, families can easily ruin us; but through love and cooperation, they can truly make us happy.
In short, this is a film full of character with a true valid statement at its premises; its comedy aspects are rather benign in what is essentially a complicated drama. A good drama, though.
Best scene: Toni Collette comes back to her apartment to find Cameron Diaz in bed with her lover. Quite a shocking reaction is due, and some good acting too.
Picture quality: Way below par. The amount of detail in the picture is almost as low as what you would expect to get on VHS.
Sound quality: Effective envelopment, but nothing to really inspire.
Overall: The upper side of 3.5 stars.
Posted by Moshe Reuveni at 9/16/2006 10:51:00 pm
Email ThisBlogThis!Share to TwitterShare to FacebookShare to Pinterest
Labels: Film