DVD: Fun with Dick and Jane 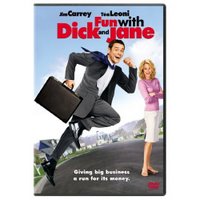 Lowdown: It's laughs aplenty when the American dream turns sour for an Enron like employee.
Review:
Jim Carrey's latest adventure starts off with him living the American dream. Or is he?
Jim is married to a good looking wife (Tea Leoni), drives a BMW, does well at his challenging work for this big corporation, lives in this huge house with a big plasma TV, and has a dog, a kid, and a maid taking care of the kid.
But is he really in dream world? Between their respective professional careers he hardly gets to see his wife, and their sex life is as alive as communism in former East Germany; his neighbor manages to taunt him with his new remote control operated Mercedes; and his child feels more at home with the maid and talks her language (Spanish) more than English.
And then Carrey gets a surprise promotion at work, which sends him to immediately spend his now huge salary only to learn rather too late that his company is at the front of a big Enron like scam. The company collapses, and within minutes Carrey and family are thrown from the heights of capitalist success into poverty.
As the situation becomes more and more desperate, the couple reverts to rather unconventional means to stay on foot, peaking with them resorting to Robin Hood like robberies.
This satire on the meaning of the American dream is full of laughs all over. It is well told, and in a world of Enrons and George W Bushes it definitely strikes a chord; you can see the love and affection the film makers have towards the big corporate rulers and the way these people tend to treat the "little people" who make them all their money. I won't deny it: I quite liked the film, despite my general feelings towards Jim Carrey's type of acting.
In fact, the film's major hurdle is Jim Carrey. He's funny, I'll give him that, but I find that his type of humor sends a film that could have easily managed to deliver a serious statement back to the realms of child level slapstick humor. Carrey did manage some serious acting in his career, but in Dick & Jane he is simply allowed to go to far.
Slightly offsetting Carrey's presence is Alec Baldwin, who seems to have found his niche at Hollywood lately playing the role of the nasty big company manager. He did it in Along Came Polly, he did it in Elizabethtown, and he does it again with great success here.
Best scene: The share price of Carrey's company slumps during a live telecast in which the newly appointed Vice President of something, Carrey, sets out to tell the world how well his company is doing.
Picture quality: Digital artifacts aplenty and lots of color inconsistencies even within the same scene.
Sound quality: Nothing exciting here, although it is up to minimum Hollywood standards.
Overall: A funny effort delving the realm between 3 to 3.5 stars (depending on the way you feel about Jim Carrey acting like Jim Carrey).
Posted by Moshe Reuveni at 9/23/2006 08:20:00 pm
Email ThisBlogThis!Share to TwitterShare to FacebookShare to Pinterest
Labels: Film

I never got to see this movie in theaters. It's currently on my netflix list so I hope to catch it soon. :) Cool blog by the way, drop by and check mine out sometime.