DVD: Everything Is Illuminated 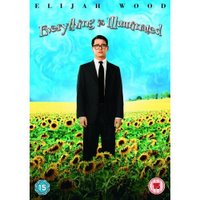 Lowdown: An unconventional and personal holocaust film about the search for answers in the past.
Review:
The first thing that is obvious about this film is that this is not your run of the mill film; it is quite eccentric.
The second is that the stars of the film, an Ukrainian youth that works as a tour guide for rich American Jews coming to see where their ancestors live before the Nazis came into the picture and Elijah Wood playing one of those rich Jews are not exactly your conventional film heroes. Both are rather understated and portrayed in a way that cannot fail to make you laugh at them (just look at Wood's glasses, for a start).
Together with the Ukrainian's grandfather and seeing-eye-bitch they embark on a journey to countryside Ukraine in order to find some answers on Wood's past, but eventually they all learn a lot about themselves and how our past is what makes us what we are today.
What sets this film apart from most other journey films is the formerly mentioned eccentricity and the special humor that is used to drive the plot along. The eccentricity is evident in every shot, with nothing being portrayed the way you'd normally expect it to, to the point that it starts becoming slightly annoying; but then the humor kicks in to set things right. Not that the humor is sophisticated or anything like that - it's pretty basic stuff, like Benny Hill without the sexism - but it's effective. And both the humor and the eccentricity become the major tools deployed by the film when tackling its serious holocaust related climax.
The result is nice to watch, if not the most illuminating film ever. And yes, in case you were wondering: Elijah Wood does receive a ring in this film, and he also befriends a character called Sammy.
I have to mention the DVD's deleted scenes section, which includes alternate scenes that really add a lot to the overall experience.
Best scene: An old woman leads the journeyman towards Wood ancestors' old village. The caravan includes the old lady, who is afraid of cars, leading by foot; the seeing-eye-bitch riding on the car's hood; and the two Ukrainians plus Wood staring from inside the car.
Picture quality: Overall, below par in most respects - noise, detail and digital artifacts. The film's lovely countryside scenery helps not noticing these, though.
Sound quality: Here and there it's nice, but overall this is an exercise in subtlety.
Overall: 3.5 stars.
Posted by Moshe Reuveni at 9/21/2006 03:33:00 pm
Email ThisBlogThis!Share to TwitterShare to FacebookShare to Pinterest
Labels: Film