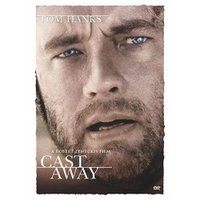 Lowdown: Tom Hanks is a lonely Robinson Crusoe.
Review:
Should I review Cast Away or shouldn't I? The film is old enough for everyone around that is even remotely interested to have enough opportunities to watch it, yet new enough so that it is still in people's heads (and the evidence is the number of references people make to "Wilson" the ball). Eventually I decided to go for it; it's fun, and it would allow me to track my viewing habits.
So need I really go over the plot? Tom Hanks stars as a dedicated FedEx employee, giving away his life and blood for his work (to the point of missing Christmas with his much beloved partner, Helen Hunt). He turns out he is giving away more than he bargained for when the FedEx plane carrying him crashes off course, living Hanks as the sole survivor on a small island. There he has to start all over again from the stone age and forward; the same applies when he goes back to normal life, eventually.
This was the third time I watch this film, mainly because I quite like it. It raises quite a few very interesting questions. Some of them are at the personal level, such as what are the really important things in our lives and where should we put our emphasis on; others are more to do with society in general, in the sense of whether we lost the plot with our excesses, leading us to lose our appreciation to the small things in life that make it potentially so great. Why is it that we only appreciate them when we lose them, such as when Hanks is stranded on an island for more than four years?
The film is very well done and quite convincing, even though the premises of being stuck on an island is rather far fetched. Pretty much the only thing that struck me as odd is the fact that after four years on a seemingly warm island with absolutely no one around, Hanks still bothers wearing a piece of cloth at his waist.
But most of all I remember this film as a mechanism to make me think along the lines of "what would have happened to me if I weren't to make this mistake that I've made 15 years ago". I do not think I have made many mistakes, certainly not in light of the information I had a the time I've made my decisions; but what the film shows us is that it is very easy to take something for granted and miss out on it due to pure luck.
Best scene: The opening of the film, where a package is delivered from the wife in Texas to her husband, who is busy betraying her with a young mistress in Moscow, is a fine example of good movie story telling.
Picture quality: Quite disappointing. Despite the lovely scenery shots, there are scenes with huge digital artifacts (Helen Hunt's hair is made to look as if it is made of cubes) and others with excessive levels of noise.
Sound quality: Quite good in helping the film communicate, although most of the time the surrounds are on the quiet side of things. Several scenes are extremely well rendered, such as the plane crash scene where all speakers are working extra time to do a very good job. Dialog, however, sounds anything but real.
Overall: Somewhere between 4 to 4.5 stars, depending the aspects of the film I'm thinking of...
Posted by Moshe Reuveni at 9/29/2006 10:44:00 pm
Email ThisBlogThis!Share to TwitterShare to FacebookShare to Pinterest
Labels: Film