Book: The Life and Times of the Thunderbolt Kid by Bill Bryson 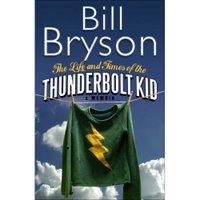 Lowdown: Bryson's review of childhood memories as an account of post-war USA.
Review:
If there is one thing to know about Bill Bryson's writing, it's that Bill Bryson delivers. Thunderbolt Kid does not fail to stick to this axiom, with Bryson delivering lots of seemingly anecdotal information that really tells us a lot in a personal way with which I, for one, can easily relate to. And he's extremely funny at it, too.
The main difference between this book and most of the other Bryson books that established Bryson is that this is not an account of his travels, but rather an account of his childhood - his years growing up in what is in current terms a small town in Iowa, USA.
The great thing about the book is that by telling us about all sorts of different aspects of his childhood, Bryson tells us a lot about the way the USA was during the Fifties. And Bryson covers a lot of personal grounds - family, country living, comics, sex - with the main object being to project his personal experiences to the grander level of the USA, where he deals with issues such as living under the threat of the bomb, inter-racial relationships, the handling of the communist threat, and much more.
The overall trend of the book is towards the realms of nostalgia. Bryson is grieving the loss of innocence that took place in the USA by the late Fifties and early Sixties, and for which - according to Bryson - the entire world is paying the price today. In this statement Bryson is not that different to what Forrest Gump was trying to say; however, while Gump offers reconciliation from the past and steps forward to a potentially brighter tomorrow, Bryson is pessimistic: his book ends when he migrates to England.
While I like the book for Bryson's witty and deeply entertaining accounts, I definitely like it more because I can quite relate to Bryson's insight. And on the big topic that acts as the main theme for the book, America's loss of innocence, I totally agree. At its basis Bryson says that after World War II the American economy developed so well that almost everybody had basically all they needed to lead a happy life. Things grew better and better throughout the Fifties, but instead of enjoying life more and working less, America seems to have forgotten what is really important in life. Bryson points at the exact point in time in which Americans chose to spend their time working more and more in order to be able to afford the things that would save them time in a mad race they can never win. At the book's conclusion, the old time charms of Bryson's home town, covered thoroughly thoughout the book, have gone to make way for huge shopping malls with even bigger parking lots.
But don't let these arguments deter you from a book that is a pleasure to read. The conclusion might make you sad and might make you think in reflection, but overall this is first and foremost an extremely entertaining book full of funny anecdotes. Say what you say about the past, we were very silly back then.
Overall: A 5 star pleasure ride.
Posted by Moshe Reuveni at 9/22/2006 03:46:00 pm
Email ThisBlogThis!Share to TwitterShare to FacebookShare to Pinterest
Labels: Book