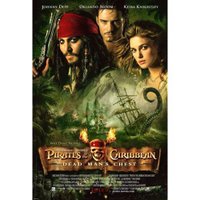 Tag: Indiana Jones, the lowly pirate.
Review:
Times are hard: We have several cinema vouchers we have to use by the end of August, and for a while now there haven't been any worthwhile movies at the cinemas. With our hi-fi system at home guaranteeing superior sound to the cinemas for more than 10 years now, and with our new TV almost matching the big screen effect of the cinema, there are not that many reasons left to go to the cinema in the first place.
But we had to, so we chose the Pirates of the Caribbean sequel, assuming this would be the best option as far as big screen gains are concerned.
And why do I bother with all of the above exposition? Simply because there is not much to say about the film itself.
It doesn't mess about starting: There is no recapping of the previous episode, which was a shame as we hardly remembered anything (no wonder, given the lack of plot). Within a few quickly cut edits the film kicked off at full swing, basically offering a barrage of extreme action scenes connected by some manufactured dialog that feels as natural as dry dog food. Anything to do with a plot or with character development is done off hand, just because the film has to do something in order to connect its action scenes.
The action scenes themselves are basically a pirate version of things we've seen before in the Indiana Jones film: extreme action (as in pulling it to the ridiculous) with a comedy twist. However, I thought the action scenes go too far in stretching the imagination, and I just couldn't take them for real; it was yet another case of over CGI-gification. Besides, as much as Johnny Depp is a good actor, he cannot match a younger Harrison Ford in stepping into the shoes of a good action hero; and neither can Orlando Bloom.
Overall, the result is entertaining, but it is just so shallow that I couldn't stop thinking about what the shallow [pun intended] Pirates of the Caribbean franchise says about us as a society given that this sequel broke a few box office records in Australia. What happened to the search for quality? How come we accept such shallow entertainment?
The film's conclusion is far from inspiring either. After two and a half hours you realize this is not getting anywhere; and indeed, there simply is no conclusion: Just like the Matrix' trilogy first sequel, it leaves you on a cliffhanger like ending to wait for the next sequel.
Best scene: Two rivaling gangs of pirates try to climb a cliff while improsoned in a cage made of their colleagues' bones and while trying to avoid detection by a guard standing on an Indiana Jones like bridge. The scene is the closest the film could get to Indiana Jones quality.
Overall: A redundant 2.5 star effort.
Posted by Moshe Reuveni at 8/12/2006 08:00:00 pm
Email ThisBlogThis!Share to TwitterShare to FacebookShare to Pinterest
Labels: Film

First of all I really liked the first film. It was way better than a movie-that’s-based-on-a-Disney-ride had any right to be.
The ‘conclusion’ of Dead Man’s Chest is much worse than that of the second Matrix. At least there Neo managed to save Trinity. Here there is absolutely nothing. Of course, they offset the Trinity thing by killing her off in the last one, which brings me to what I liked the least about this movie – They were unfaithful to the characters, especially to Commander Norrington.

I don't know, I just found Pirates 2 to be a collection of scenes without much linking them. It starts abruptly, it ends abruptly, but no one seems to care because of the roller coaster scenes in the way.