Film: Over the Hedge 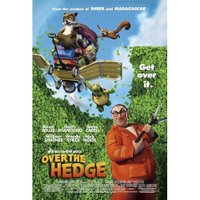 Lowdown: Shrek worked, Madagascar earned lots - let's do it again!
Review:
Is it just me that is getting tired of the continuous stream of look alike and tell alike CGI based films, all trying to capitalize on the success of the original Shrek? Is it just me that finds these films' constant pop culture references to be way past their originality expiration dates?
Not that the concept is too bad in this one, especially if you bear in mind that the film is mostly aimed at kids. You got yourself a bunch of hibernating animals that wake up to find themselves surrounded by a new suburb. Instead of collecting food for next winter the old fashioned way, they resort to stealing junk food from their new neighbors. And since this is not enough to fill a film on its own, even if the film is quite a short one to begin with, we get the usual American film formula of a hero who has to betray his friends only to realize that his friends (being friends) will take him the way he is.
Thing is, I would have been touched if I haven't seen it all before: the animation, the plot, the morals. The film is definitely entertaining, but it's of the usual American cinema industry run of the mill crop: we have a winning formula, let's continue printing money by doing the same again.
I'll give it one thing: I found it much better than Madagascar, which I thought was a really bad film. At least with Hedge you get a slight attempt at substance.
Best scene: The squirrel drinks a Red Bull like drink and becomes so hyper that everyone around him slows down to the point that we can see laser beams progressing slowly. A nice touch of physics to an otherwise very unoriginal film.
Overall: 2.5 stars for the entertainment, plus 0 for originality.
Posted by Moshe Reuveni at 8/13/2006 09:41:00 pm
Email ThisBlogThis!Share to TwitterShare to FacebookShare to Pinterest
Labels: Film