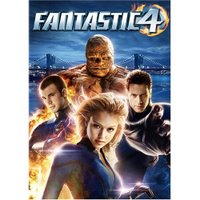 Lowdown: Four times the crap.
Review:
I have my problems with Hollywood's run of the mill films, but as much as I complain I also enjoy them for the "forget yourself for two hours and just have fun" element of them. Fantastic Four, however, is sadly just too bad for me to forget myself with.
Everything about this film is cliche based. All the relationships between the characters, all their motives - it could all be summed up with "I want the girl", "I want more money", "I want power", or "I want chicks". And thus you don't really need me to tell you what takes place when five people end up being exposed to this mysterious radioactive cloud which gives them unique super powers: one of them becomes the baddie, the others are the goodies, and let the special effects reign.
You can well argue that the film never intends to satisfy any superior artistic needs, being aimed directly at kids or at those looking for very basic entertainment. While there's nothing wrong with that, I think it is bad that those who are at their weakest (e.g., kids) get exposed to a film that specifically shows the winners taking home lots of money and girls. Call me an idealist, but I think there's more to life than getting more money than you can spend. I certainly hope the producers of this film didn't get much back for their investment - maybe next time they'll be up to something more constructive.
Best scene: The end credits.
Overall: 1 falling star.
Posted by Moshe Reuveni at 8/27/2006 10:47:00 pm
Email ThisBlogThis!Share to TwitterShare to FacebookShare to Pinterest
Labels: Film