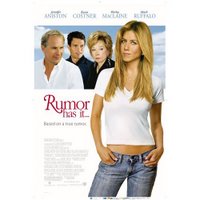 Lowdown: The Graduate gets the Harry Met Sally treatment.
Review:
Once upon a time there was a funny actor called Rob Reiner who played in the Archie Banker TV series and went on to direct two great films: The Princess Bride and When Harry Met Sally. However, after you watch his latest, Rumor Has It, you can't escape asking the question: What happened to you, Rob?
Rumor Has It is supposed to be a sort of a sequel to The Graduate, the famous Mrs Robinson film starring a very young and rebellious Dustin Hoffman who just can't get along with the path his parents set out for him and the expectations everyone has of him. Rumor Has It stars a significantly inferior Jennifer Aniston as what seems to be daughter of Dustin's runaway bride, trying to come to grips with that shocking truth given her recent engagement to a seemingly boring lawyer.
However, while the Graduate was a groundbreaking film, this one is just a shallow comedy of the type you'd forget about a couple of minutes after the lights turn on. Sure, it has a few nice performance from Shirley MacLaine, and it does try to tell you that it's not the flashy flash around which you need to build your life but rather the steady and the reliable, but the bottom line is just worthless and shallow. Funny at times, but as of much substance as artificial sugar.
Best scene: Rob Reiner tries to mimic his famous split screen scene from Harry Met Sally. There's no split screen here, but there's abnormal fast editing taking you between separate dialogs to create a similar effect. Not as original as the first one, and overall not as good, but probably the best this film could muster.
Picture quality: Wow! One of the best I've seen on DVD.
Sound quality: Typical for shallow comedies - everything is in the center speaker, with the surrounds mainly acting as room decoration.
Overall: 2.5 stars, after adding 0.5 stars for playing Simon & Garfunkel's Mrs Robinson.
Posted by Moshe Reuveni at 8/21/2006 10:33:00 pm
Email ThisBlogThis!Share to TwitterShare to FacebookShare to Pinterest
Labels: Film

You left out "The Sure Thing" and "Stand By Me". And "The American President" is pretty good too. And "A Few Good Men".

Didn't want to rub it in.
To be sincere, the two films that I mentioned are the ones that make me go "wow" whenever I hear the director's name. The ones you mentioned are classics, to one extent or another, but they don't move me half as much as the two I mentioned.