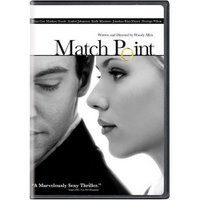 Lowdown: We think we control our lives, but random events - regularly referred to as luck - are much more in charge than us.
Review:
I like Woody Allen's work; I can't deny that. When asked to quote the best films from the last few years, I will name Melinda and Melinda (amongst others), despite what most critics say. We missed out on Match Point at the cinema, so I was quite eager to wait for its DVD release.
I wasn't disappointed: the film is both an excellent thriller, a great story about morals, and a statement on how seemingly minor things that happen around us control our lives much more than we do (something I can definitely relate to in my current personal circumstances, but that discussion does not belong here).
The story is led by Jonathan Rhys Meyers, who plays a tennis instructor that aims high. In order to get to his ambitious highs he befriends his pupil's rich family and becomes the lover of his pupil's sister; things go wrong once his ambitions lose all of their inhibitions and he goes for his pupil's fiance (Scarlett Johansson) , too, which rolls out the story about our morals and aspirations. The film is relatively long - over two hours - but never felt this way; the more it progressed, the more I was anxious to see what is about to happen. Rarely does a film manage to captivate me so badly.
Not that the film is without faults. First and foremost, I find Mr Rhys Meyers (whom I first remember from Bend It Like Beckham) to be quite a "single expression only" character. Instead of being able to see the film through his eyes, I kept getting annoyed with his constant hazy expression.
Next there is the issue of the portrayal of London's top financial echelons, in the form of the tennis pupil's family. They simply don't feel real and life like; everything is too ideal and too convenient as far as what the film is trying to say. Obviously, this is done on purpose in order to make a point, but the fact it goes a bit too far draws away from the suspension of disbelief. And obviously, while the film may take place in England, it is aimed at American audiences, for the simple fact that there are just that many times an English person will use English English phrases that seem to get the film's knickers in a twist.
Best scene: I like the scenes where small innuendos established the relationships between the characters while allowing the audience to see what they really think. Such a scene was the one where the tennis instructor goes to the opera with his pupil and meets the pupil's family for the first time, already targeting the different family members. The scene helps in establishing one of the more interesting aspects of the film: all of the characters are inherently flawed and all of the characters are motivated by selfishness.
Picture quality: Shots look very life like, but despite the more than conventional bandwidth provided in this DVD the picture constantly shows heavy signs of digital compression - jagged edges, halos around objects. I wonder what caused this one to go so horribly wrong.
Sound quality: I like Woody Allen, but I don't like him sticking to mono sound on all his films. Good immersive sound can add so much to a film!
Overall: An excellent 4.5 star effort.
Posted by Moshe Reuveni at 8/18/2006 10:58:00 pm
Email ThisBlogThis!Share to TwitterShare to FacebookShare to Pinterest
Labels: Film

Regarding Miss Johansson, I always give the great Orson Scott Card quote (talking about Michelle Trachtenberg, BTW):
"she has grown up very nicely, into an actress rather like Scarlett Johansson, except that her face registers emotion like an actual living person."

I don't think Johansson is that bad. I think she's pretty good in this one, but I cannot say that I'm a supreme appraiser of acting skills.

P.S. I don't get it:
This Trachtenberg is supposed to be better than Johansson?