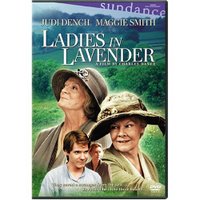 Tag: Harry Potter refugees' chick flick
Review:
Ok, you might have guessed it the minute you read the headline: this DVD was rented by my beloved wife. I didn't mind it at all, though; for the right mood you can do much worse than a chicks' flick.
The film stars several Judi Dench with some old refugees from the Harry Potter film franchise. They live together near an English beach at the brink of World War 2, mainly minding their own business and being very British about it. Then, suddenly out of the blue (literally), they find this young guy thrown at their door step by the angry sea.
They take care of the young boy, and while doing so they all fall for him one way or another. But eventually the boy wants to go on living his way and doing what interests him (which in this case is playing the violin), so the old women have to learn how to let him go.
Overall, the film is a nice and relaxing one. It's quite a pleasant experience to watch it, and in particular I enjoyed the very English way in which people go about their ways in the film. I have been exposed to English-ness quite a lot lately, and personally I find a lot of it to be quite weird and lacking in sense: things like all the characters in the film wearing suits and ties all the time, wherever they are (the same suits and ties all the time, by the way).
But the film is less than satisfying in many other respects, too. Nothing at all is said about the boy and where he came from and what caused him to find himself thrown at the beach that fatal day. Nothing unique is said about his origins, which - given that this is a film where every item is supposed to let us think of whatever it is the director wants us to think about - is a bit of a waste.
Overall, you can treat the film as a nice metaphor to relationships in general and parenthood in particular. As a parent you may long for a child, and then when you suddenly get one you will work hard at raising it. You won't get much gratitude, though, and eventually the child will abandon you in favor of one whim or another.
Best scene: When someone plays the violin very badly for the boy, who takes the violin and plays quite well. Mainly because the music is nice.
Picture quality: Some scenes are so well composed and the colors and everything are so beautiful it's just a pleasure to watch. Other scenes suffer from excess noise and lots of graininess; this inconsistency is quite frustrating.
Sound quality: This is no major action film, so don't expect to be in the middle of a show down. However, given the genre, surround envelopment is quite effective. The music scenes, especially the final one, are very well recorded.
Overall: A nice and calm 3 stars.
Posted by Moshe Reuveni at 8/06/2006 06:10:00 pm
Email ThisBlogThis!Share to TwitterShare to FacebookShare to Pinterest
Labels: Film

I beg to slightly differ.

Lesley and I watched this movie a coule of months ago and I found it fascinating and moving.

My view is that the boy's origins are irrelevant. He's the catalyst, only there to test the strength of the two female characters and to create that spark they have been longing for - to love and care for a male, as a son or a man.

I also think that (Dame) Maggie Smith deserved a mention! Not just a refugee from Harry Potter. She is, like Judi Dench, an outstanding performer, even if it's Harry Potter. Respect!...

I also found the Englishness very true. England has always been a conservative place, especially back then. The country location where the movie takes place is nothink other than your average English village - a small, tight community where everyone knows everyone else's business. The suit business, well, it's true Englishness all the way! It's all about appearances, formality, manners and the british equivalent of the French "savoir-faire".

I would give the movie a 3.5 to 4.0 and, like yourself, I think it's very enjoyable and relaxing.

Overall, I thought it was about different aspects of life accordint to different backgrounds and nationalities, age groups and ambitions. A beautiful story.

Thanks for your entertaining opinion!
In general, I agree: it's a simple, beautiful story.

You should have gone with "'M' For McGonnagal".