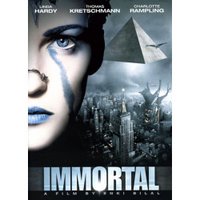 Lowdown: Half Life look-alike making zero sense.
Review:
We never heard of this film before encountering the DVD at the video rental place; we ended up renting it because it was science fiction and we're ever so sensitive to that genre. Alas, now we know why we never heard of it: It just doesn't make sense.
Set in a futuristic world that looks a lot like the world of Half Life, with similar computer graphics making the most of it (small bits are shot live), this is a tale of a future New York mixing aliens, gods, and companies after increasing their profits.
Sadly, I cannot tell you more about this film, simply because I failed to understand most of what took place. Ok, I got the basic plot (I think), but it didn't shape up into anything of any significant meaning. Watching the supplementals it seems as if this film is a based on a collection of comics stuff written by its director, Enki Bilal.
One thing you can see in the film is its French heritage: the film freely borrows quite heavily from the Fifth Element. In its favor, the film looks good; but looks alone do not make a film good. Next time around it should try starting with a plot and some meaningful characters.
Best scene: The opening scene, due to its aggressive and immersive surround sound. And that's it.
Picture quality: It's really hard to judge, given that most of what you see is computer graphics that is aimed to look arty. Overall it's probably pretty good at conveying the director's intentions.
Sound quality: aggressive and immersive - just the way movie sound should be. You're in it, not looking at it.
Overall: 0.5 meaningless stars. Pretty bad, in short.
Posted by Moshe Reuveni at 8/21/2006 11:03:00 pm
Email ThisBlogThis!Share to TwitterShare to FacebookShare to Pinterest
Labels: Film