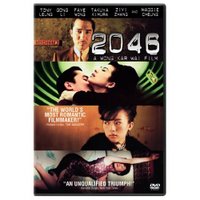 Tag: Arty-farty, Chinese style
Review:
I like films. I really do. So when I get to watch a film that makes me think "why am I wasting my time on this one" and look for the stop button on the remote, I take particular notice to mark the event. Overall, I cannot recall many such film; but 2046 qualifies.
The story is quite simple and could have been told in 10 minutes instead of two hours plus: A guy falls in love, gets hurt in the process, tries it out with other women, but slowly finds himself descending into this story that he's righting about this perfect place in the year 2046 and loses touch with reality. That's it, pretty much (sorry I have spoilt it for you).
In order to thicken the thin plot, the film tries to do it all the arty-farty way: time lines are mixed, imaginary scenes from the book the guy is writing are mixed in, and overall the film is overcome with artistic like photography and quite a mezmerizing soundtrack. If you like films because of their look, you will adore this one.
But I just found it all too excessive (starting with the film's length). Yes, when Tarantino first introduced me to the concept of mixed time lines I thought it was clever; now I know it was a copy, and since 1994 (or whenever Pulp Fiction was released) I noticed that the trick was usually being used by directors who tried to cover for one deficiency or another by using it to distract the audience. I know that many who read this will beg to differ, but then again everybody is entitled to have an opinion.
And in my opinion 2046 sucks.
Best scene: The hero tries to get a hotel room from a rather racist hotel manager. It was the only scene in the film that made me laugh, I guess.
Picture quality: I've seen DVDs with better picture, but given the artistic nature of the film, I think I can sum it up with one word - nice.
Sound quality: As per the picture quality - nice.
Overall: A pretty boring 1 star.
Posted by Moshe Reuveni at 8/09/2006 10:20:00 pm
Email ThisBlogThis!Share to TwitterShare to FacebookShare to Pinterest
Labels: Film

1. writing
2. I've read some bad reviews of Pulp Fiction saying just that (that it tried to confuse you to cover up other problems)
3. For a slightly different view, read http://www.scifi.com/sfw/screen/sfw1016.html .

1. Phew, that "righting" vs. "writing" is pretty bad, isn't it? I amaze myself.
2. If you're saying that Pulp Fiction is not as good as people say it is, then I definitely agree.
3. I'm fully aware that most reviews went out of their way to praise 2046. The reason why we rented it was The Age giving it 5 stars. Still, we just found that although we got the point, we were quite bored getting there.