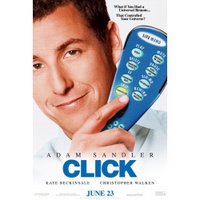 Tag: Family First
Review:
By now you know that you cannot expect much out of an Adam Sandler flick. There is the Punch Drunk Love exception, but you know what I'm talking about: once you know a certain film is an Adam Sandler film, you immediately know what it is going to be like. And this one is not an exception.
In this particular episode, Sandler is a married man who is married to work. Due to some weak excuse of him, an architect, not getting along with remote controls, he seeks out a universal remote control; what he gets instead is a remote control that controls his life by working like a DVD menu (quite a limited vision, isn't it?).
He uses the remote to get a bit of a breather navigating between his wife (Kate Beckinsale, who for some reason I find quite cute), his parents (his father is played by the guy who did Fonzy, who seems like a repeating fixture in Sandler films), and his nasty boss - David Hasselhoff, who - if you ask me - is the real star of the show.
In typical Hollywood fashion, what starts as a source for many a joke - below the belt type jokes, but they work well - ends up as something bad, teaching Sandler that there are no free lunches in this world and that family is more important than work. The problem, though, is that this moral - which, as morals go, is a pretty decent one - is spoon fed to you in quite a patronizing way, paving the way for yet another shallow Sandler film.
Best Scene: David Hasselhoff gives his employees a Baywatch like presentation on sexual harassment at work.
Overall: 2.5 stars
Posted by Moshe Reuveni at 7/30/2006 03:37:00 pm
Email ThisBlogThis!Share to TwitterShare to FacebookShare to Pinterest
Labels: Film

Got to disagree Moshe, Punch Drunk Love is not an exception in Adam Sandler's career. It's slower than a tortoise and the appalling soundtrack has to be heard to be believed. That's before we even consider Mr Sandler's 'acting'. Will be avoiding this movie like the bubonic plague. Thanks for the 'heads-up'!

I actually liked Punch Drunk Love quite a lot. Found it original, and that Phillip Seymour Hoffman gave a bombshell of a performance.
I do admit I have a sensitivity to that director (he did Magnolia, which I think is one of the better films ever).

I also think Magnolia is a fantastic movie, but I just couldn't get to grips with Punch Drunk Love. Unlike Magnolia, I had no sympathy for, or made any connection with any of the characters. The score was so annoying, with electronic meanderings, that seemed to distract, rather than complement the visuals.

PDL was definitely a weird film, but I like it because of the eccentric characters it featured. By now I can't say I remember anything of the score.
Anyway, the bottom line is that we both agree Sandler is not a stellar performer.